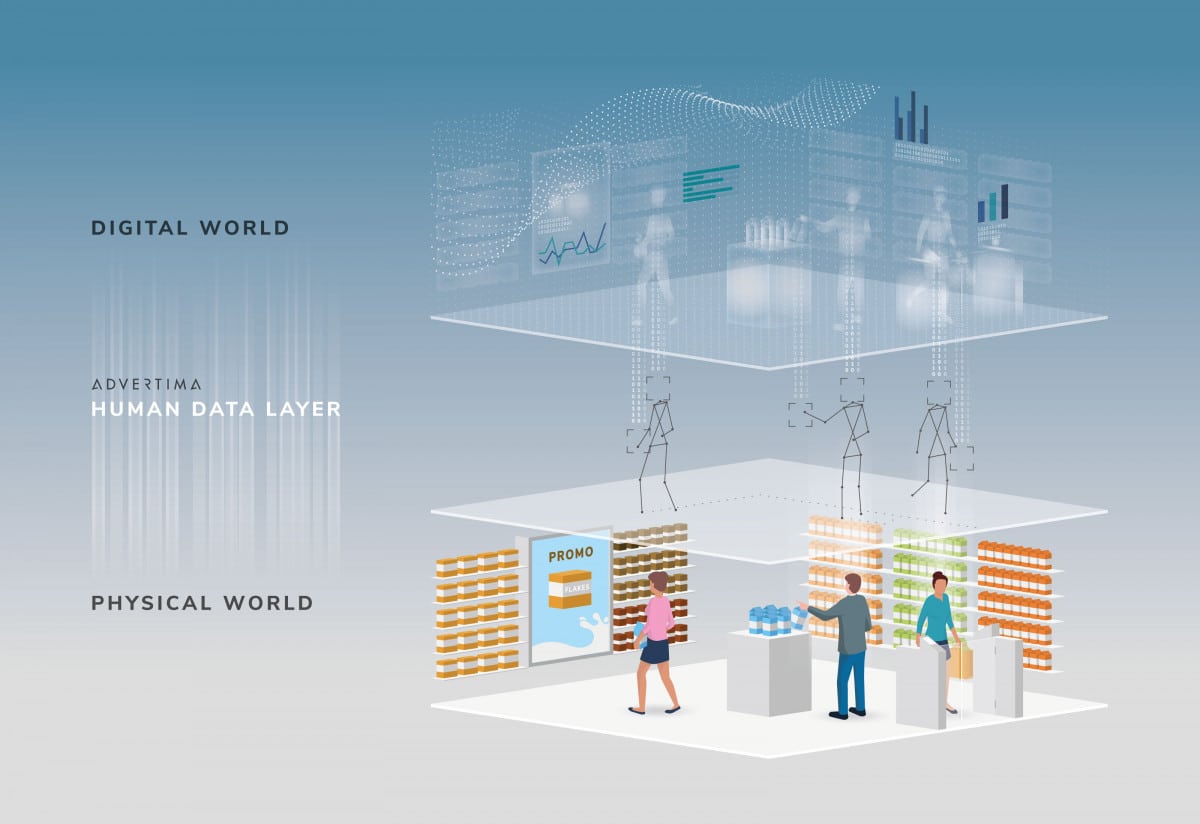 St.Gallen, Switzerland 28 July 2020 – Advertima, an emerging computer vision platform provider, today announces the close of a €15 million Series A investment round led by existing shareholder Swiss real estate company, Fortimo Group. Advertima empowers grocers and other retailers to create smart spaces that offer consumer-centric, frictionless and relevant in-store shopping experiences. The investment will enable the start-up to further develop their platform on a global scale and strengthen their position as a critical player in the wider ecosystem of the smart space environments.

Through computer vision, machine learning and artificial intelligence (AI), Advertima has created the ‘Human Data Layer’, which visually interprets human behaviour in physical spaces. By providing a real-time and easily accessible data stream, Advertima gives the ability for the smart spaces of the future to interact with people in a seamless and meaningful way.

The first sector that Advertima has set its sights on is grocery retail. In a fast-changing retail world that is quickly adapting to the impact of COVID-19, Advertima’s technology helps fast-track the evolution of grocery retailers. Advertima offers smart inventory management and autonomous checkout while also providing engaging and relevant content on smart digital screens throughout the in-store shopping journey of every customer. By making retail spaces smart, grocers maximise the efficiency of their stores, increase their revenues and generate greater returns per square meter.

In the near future, smart spaces will be ubiquitous and a part of the fabric of everyday life. Advertima plays a crucial role in the emerging smart retail ecosystem, powered by their Human Data Layer. Consumers are at the core of the evolution of smart spaces and will expect a living and working environment where interaction with technology is seamless and unnoticeable.

Advertima’s smart retail portfolio has been developed with Switzerland’s largest retailer, Migros and the international grocer SPAR. The technology is already being used by 14 companies across eight different countries.

“It is clear that the rapid digitalisation of our society is going to have an impact on consumer habits, especially in the retail sector,” says Fortimo Group Founder Remo Bienz. “Advertima is at the cutting-edge of technology in the retail space. As a long-standing shareholder, we know how visionary their technology is, but also how it has been successfully adopted by major, global organisations and already generated significant revenues. We’re excited to be part of Advertima’s journey.”

“We’ll be investing €25 million in the further development of our smart retail solutions over the next two years. €10 million of this investment will be financed by our own revenues so this €15 million round is a crucial milestone to help us achieve our vision for how the world will look by 2030,” says Advertima Co-Founder and CEO Iman Nahvi. “We see a world where the physical and digital layers are merged to enhance our daily professional and private lives. Advertima’s Human Data Layer will be one of the irreplaceable components in this whole ecosystem of applications and technologies that will build the foundation of our future lives.”

“Since its founding in 2016, our Swiss start-up has had a global technology vision. This funding round brings our vision nearer to reality,” says Damir Bogdan, Advertima Seed Investor and President of the Board.

Advertima is a 3D computer vision platform provider founded in 2016 and headquartered in St.Gallen, Switzerland. Advertima visually interprets human behaviour in the physical world, enabling smart spaces of the future to interact with people in seamless and meaningful ways. Their real-time and easily accessible data stream, called the ‘Human Data Layer’, powers their smart retail solutions, including Autonomous Store and Smart Signage. These next-generation solutions empower companies to create the customer experience of tomorrow: frictionless, relevant and highly-targeted. Advertima is fully compliant with the EU General Data Privacy Regulation (GDPR).

A message from the CEO: Announcement of Series A funding for Advertima’s Human Data Layer